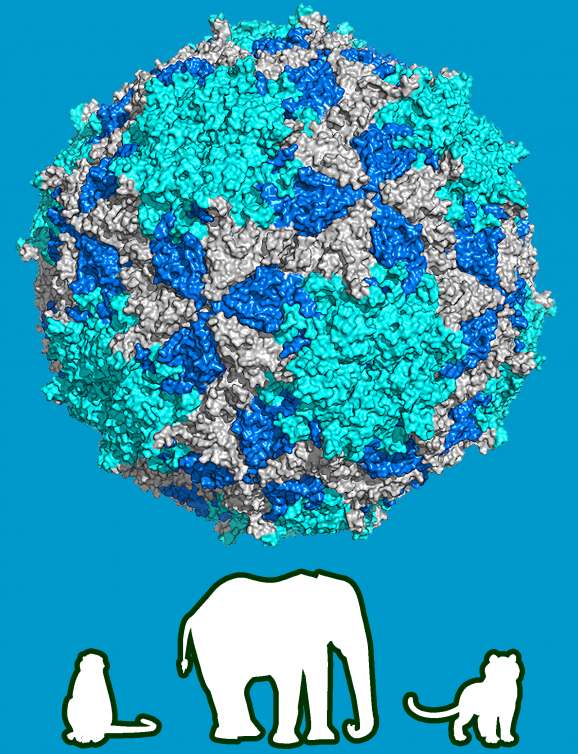 The EMCV particle consists of 4 individual proteins which are color-coded for demarcation. Three of these – VP1 (shown in cyan), VP2 (shown in gray), and VP3 (shown in blue) – are exposed on the outer surface of the virus (VP4 is found inside the particle and is therefore not visible in the image). EMCV is known to cause severe disease and/or fatal infections in numerous zoological species including non-human primates, elephants, and large cats such as lions.

Encephalomyocarditis virus (EMCV; family Picornaviridae) is a rodent-borne virus that is very well-known to the zoological community worldwide, as it has repeatedly caused severe outbreaks resulting in the deaths of zoo mammals – most notably elephants – for decades. We have been investigating recent EMCV outbreaks in zoos in the U.S. that have resulted in mortality of numerous African and Asian mammals including elephants, hippos, and multiple primate species, including those that are endangered. Understandably, these outbreaks and the loss of unique and rare megafauna are a major concern to zoos.

As EMCV outbreaks will undoubtedly continue to occur in the future, new avenues of vaccine research and a better understanding of the natural history of the virus are critically needed in order to adequately protect animals from fatal disease. Ultimately, these studies will allow us to identify factors that facilitate EMCV emergence in zoos and how EMCV genetic diversity affects antigenicity and future vaccine development.