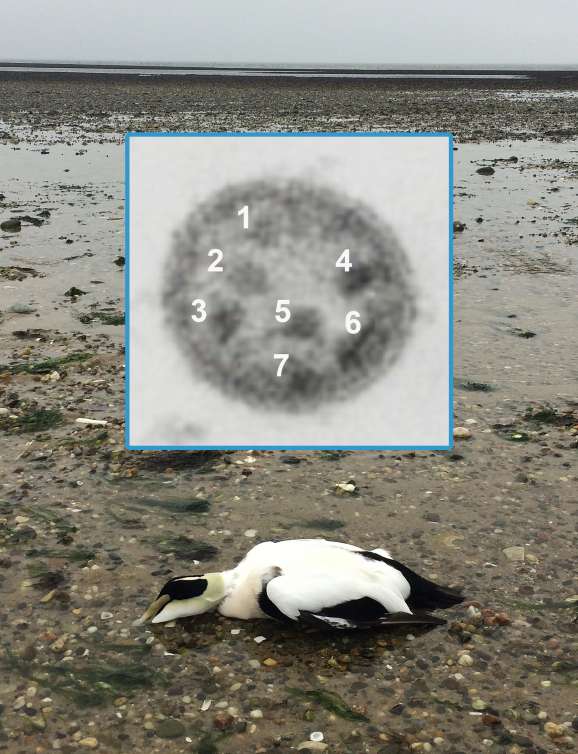 A moribund male common eider at Jeremy Point, Cape Cod National Seashore, Massachusetts, in the presumably late stages of WFBV infection; note the bird is unwilling or unable to move after being approached. The inset shows a cross-section of a WFBV particle (~100 nm in diameter) isolated from an eider, demonstrating the 7 RNA segments within the virion [Image adapted from “Cyclic avian mass mortality in the northeastern United States is associated with a novel orthomyxovirus,” Journal of Virology 89:1389-1403].

We recently identified two novel viruses called Wellfleet Bay virus (WFBV; family Orthomyxoviridae) and Jeremy Point virus (JPTV; family Nyamiviridae) that are associated with large-scale outbreaks of avian morbidity and mortality in Cape Cod, Massachusetts. The birds affected during these outbreaks appear to be almost exclusively a species of large sea duck called the common eider (Somateria mollissima), which spend the majority of their lives on the open ocean, only coming to shore for extended periods in order to breed along coastal areas and nearby islands.

Although the number of sick or dead eiders reported during these outbreaks has numbered in the hundreds to thousands, it is still unclear how and where the birds are being infected with these viruses, and these studies will help to further our understanding of the evolution, emergence, and epizootiology of WFBV and JPTV.