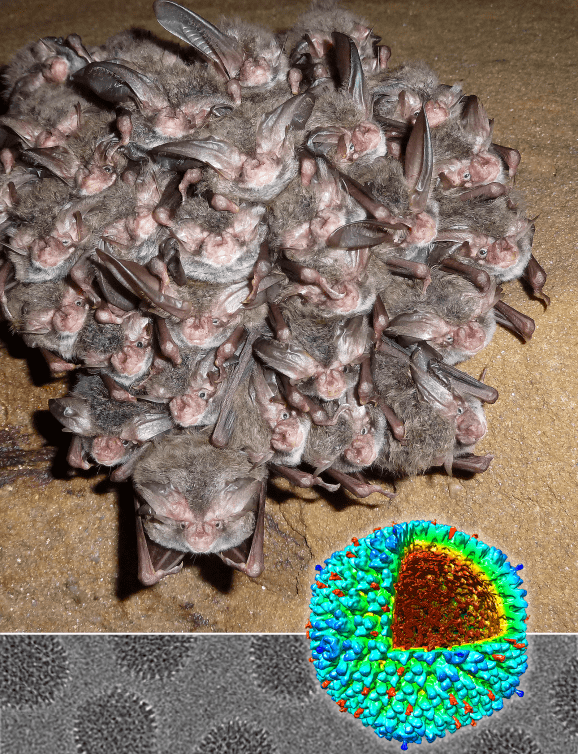 During winter hibernation, bats may form densely packed clusters to conserve heat and energy, as shown with these Rafinensque’s big-eared bats in Mammoth Cave National Park, Kentucky. The lower panel shows a novel adenovirus isolated from this population of bats embedded in vitreous ice (gray image), which was then used to reconstruct the three-dimensional structure of the virus (multi-colored image) by cryo-electron microscopy [Image adapted from “Evolution and cryo-EM capsid structure of a North American bat adenovirus and its relationship to other mastadenoviruses,” Journal of Virology 91:e01504-16].

In this project, we are examining the prevalence and diversity of bat-borne viruses of public health and wildlife disease significance that exists in U.S. bat populations. Currently, we have a surprisingly limited knowledge of the breadth of bat-borne viruses that are endemic in the U.S., and are thus unprepared for potentially diagnosing such viruses if they were to emerge into the human or domestic animal population.

Although bats are now being recognized as important reservoir hosts for a number of viruses, including some that may pose a serious risk to human health, it is important to emphasize the critical biological and economic role they play in many different ecosystems through pest control, pollination, and seed dispersal. Therefore, future research into the natural history and epidemiology of bat-borne viruses should be coupled with the aims of bat conservationists in order to maintain and protect their populations from negative stigmas that may be associated with being potential reservoirs of zoonotic viruses.