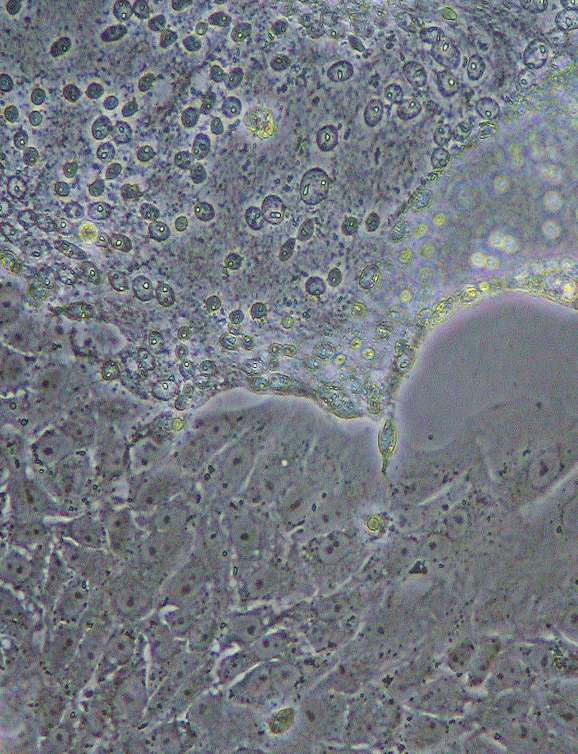 African green monkey kidney cells (Vero E6) infected with an orthoreovirus isolated from an American crow. The characteristic cytopathic effect of ARVs in cell culture is the development of syncytia or giant multinucleated cells. Note the upper portion of the image shows a large, virally-induced syncytia containing numerous nuclei, with normal (non-infected) cells shown in the lower portion. Syncytia are formed by a small nonstructural viral protein known as p10, also called the fusion-associated small transmembrane (FAST) protein, which is inserted into cellular membranes to induce cell-to-cell fusion.

Avian orthoreoviruses (ARVs; family Reoviridae) are ubiquitous in nature and are known to infect domestic (e.g., chicken, turkey), captive (e.g., psittacine), and wild (e.g., passerine) species of birds. Historically, ARVs have been considered of little concern as an avian pathogen; however, that notion has changed in recent years, as there has been a significant increase in the incidence of disease caused by ARVs, most notably in viruses that induce arthritis and/or tenosynovitis in domestic turkeys. Although various disease syndromes associated with ARV infection have also been documented in wild birds, including hemorrhagic enteritis in corvid species, very little is known concerning the basic natural history of ARVs in wild birds.

As noted, there are significant gaps in our knowledge of the diversity of ARVs that exist in nature, their specific role in pathogenesis among various species, as well as the extent to which ARVs are transmitted between wild and domestic birds, which these studies will be addressing.